East Liberty was once one of Pennsylvania’s most prosperous areas, but disastrous urban planning in the 1960s saw both the central business area decimated and tower blocks erected leaving residents isolated in the sky.

But change is again coming to East Liberty. The traffic in the centre is once again flowing after being rerouted in the 60’s, the tower blocks are coming down and new shops are offering everything from yoga to organic food.

Everybody, seemingly, is a winner…

This unique documentary, called “East of Liberty“, explores issues of race and class and addresses resident’s fears about gentrification. The goal has been to create a historical record that captures the essence of community change and exposes taboos in frank conversation—from displacement to neighborhood violence to discussions of race and class—which most redevelopment efforts ignore. This series has been used in classrooms of higher education to engage students in a timely debate and discussion about urban redevelopment, gentrification and related social and economic issues.  It serves as an ideal teaching tool for courses including those in urban studies, public policy, race and ethnicity, sociology and others.  Each film stands alone, addressing different stages of the redevelopment process and different key issues in community change.

WE RISE TOGETHER- A Duolingo & East of Liberty Project

APRIL 15TH: East of Liberty/NPR “Going There In Pittsburgh” follow up discussion at Ace Hotel Pittsburgh

Join us on April 15th for the follow up discussion to the much discussed NPR event Going There In Pittsburgh. Hosted and filmed by Chris Ivey. Moderated by Pittsburgh Post-Gazette columnist Tony Norman and journalist/historic preservationist Karamagi Rujumba. More details to come. Suggested donation is $10 or more. The event will be free for displaced […] 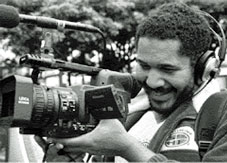 Chris Ivey, a seasoned filmmaker in Pittsburgh, first started working on the project in May 2005.

He found himself filming a publicity stunt in which paint bombs were being launched by employees of the regeneration company from a giant catapult at a soon-to-be demolished tower block, East Mall. But, admist the revelry, he found residents far from happy.

“I was hired to document the tearing down of the high rises. At the same time I interviewed some of the residents who lived in the high rises and they weren’t happy at all because of the spectacle that was before them. They were really angry. It was their home, it was where they used to live, some for 30 years or more. Even though in many ways it wasn’t the best place to live it was all they had and to see strangers having fun by shooting paintballs at the block left them furious.”

And so began a journey of investigation in which previous silent rage was given space to talk.The film first debuted in the US last Autumn, and the response has astounded the director: “The reception here has been really incredible. It’s the most talked about thing in the city right now. There’s been loads of coverage in the papers and everybody around town is talking about it. All the screenings have sold out. The people at the screenings are really passionate – they’re always asking what they can do to get involved.”

Use the PayPal button below to contribute a donation towards supporting this film series.